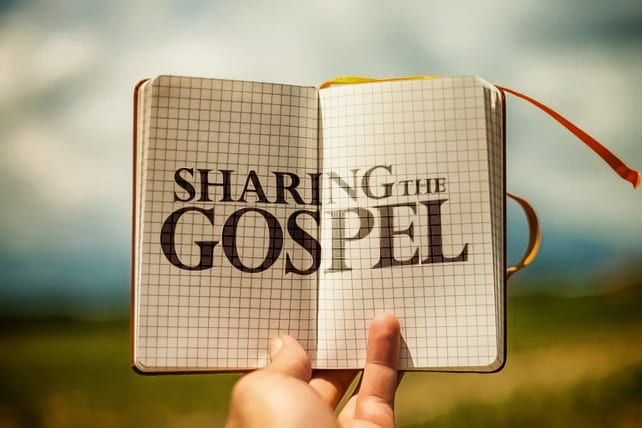 I really like this Gospel presentation from Dare2Share ministries because it tells the entire redemption story of the Bible in an easy to remember way. Visit Life in Six Words or Dare2Share for more resources and videos.

In these two chapters God creates all of the universe and everything in it (Genesis 1:1), including the first man and woman, Adam and Eve. God created Adam and Eve with purpose. He called them to “be fruitful and multiply” (Genesis 1:28) and fill the earth with their offspring. He gave them the mission of taking care of the earth and tending the Garden of Eden (Genesis 2:15.)

God made them to be in complete fellowship with Him and with each other. Their nakedness (Genesis 2:25) represented the fact that they had no sin, therefore no shame, therefore nothing to hide before God or each other. They regularly communed with God in the garden and had sheer bliss, pure happiness and unadulterated joy. It was during this time that they were living everyday as God intended, in right relationship with each other, God and His creation. The only command God gave to them was not to eat from the fruit of the tree of the knowledge of good and evil.

In the same way God made us to be in fellowship with Him. His original plan was that you and I were in absolute and perfect relationship with Him and with each other in total unity. God created us to be in harmony with all of heaven and all of earth. But that plan was disrupted by one evil act thousands and thousands of years ago.

OUR sins separate us from God. (Genesis 3)

When Adam and Eve were tempted by Satan and ate of the tree of the knowledge of good and evil (Genesis 3:6), and thereby sinned, they immediately became aware of their “error.” They sewed fig leaves together to cover their shame and hid in the garden from God (Genesis 3:7,8). Now they were hiding from the one that they used to fellowship with regularly. Men and women have been hiding from God ever since, covering their sin and shame with the fig leaves of religion or philosophy.

God confronted them face to face. As a result of their sin there were immediate and future consequences. The immediate consequences were being banished from the garden (Genesis 3:23,24), having difficulty in childbirth (Genesis 3:16) and our work turning from a joy that we love to a job that we hate (Genesis 3:17-19).

The future consequence for Adam and Eve was physical death. God had promised in Genesis 2:17 that the day he sinned by eating of the fruit of the tree of the knowledge of good and evil that he would “surely die.” Spiritually Adam and Eve died the day they sinned in the garden. Their souls became immediately polluted by sin and selfishness. As a result all of their offspring (and that includes you and me) were born sinful and selfish. Through Adam every person ever born is born deprived and depraved, deprived of God’s fellowship and depraved to the core (Romans 5:12-14).

When confronted by God the blame game begins. Adam blames Eve (Genesis 3:12) and Eve blames the snake (Genesis 3:13). Humanity has been playing the blame game ever since. What began as paradise unraveled with a single choice to disobey God and listen to Satan instead. Every war, famine, argument, sin and tragedy can be traced back to the garden of Eden where Adam and Eve chose to turn their backs on God for a taste of fruit.

From the beginning humanity has attempted to remove the stain of sin by good deeds. When Cain offered God vegetables as an appeasement for his sin God rejected it (Genesis 4:1-4). Cain was infuriated and killed his brother Abel.

In Exodus, the second book of the Bible, God gave the Israelites the 10 Commandments (Exodus 20:1-17), not to save them from their sin, but to show them that they couldn’t live up to his perfect standards on their own (Galatians 3:23-24). Instead of looking to Him in faith many of the Jews looked to themselves and thought they could please God in their own strength. But God saw their “righteous” deeds like filthy rags (Isaiah 64:6). Even the best of their good deeds were corrupted by selfish motives.

In Leviticus, the third book of the Bible, God gave the Israelites the sacrificial system. Every time a Jew sinned he or she was to sacrifice a goat without any blemishes (Leviticus 4:27-31). Think about that. If you were a Jew in the Old Testament and had to make a sacrifice every time you lied, lusted, gossiped, complained or argued you would soon run out of goats. Other offerings included offerings of bulls and sheep.

The sacrificial system was meant to point inward, upward and forward. It pointed inward to convince you of your sinfulness. If you were honest before God then you would soon realize that you could never make enough sacrifices for your sin. It pointed upward to make you trust in God for your salvation instead of sacrifices that you could make (Psalm 51:16,17). It pointed forward to the ultimate sacrifice of the lamb of God, Jesus Christ, who would someday come to take away the sin of the world (John 1:29).

The rest of the Old Testament tells the story of the Jewish people, some of whom realized they were sinners and needed God to save them (Psalm 51:1,2) and most of whom trusted in their own goodness instead of the mercy and grace of God (Isaiah 64:6).

When Jesus came to the earth he came as the fulfillment of the law (Matthew 5:17) and the ultimate sacrifice (Luke 24:46). He lived the perfect life that we could not live and died in our place, for our sin. When he died upon the cross he screamed the words “It is finished” (John 19:30). What he meant by these three words was that the price for our sins was paid completely. He was fully God and entirely man. As a perfect human he could die for other humans. As the true and living God his payment for sin was infinite.

Jesus rose from the dead three days after he was murdered on the cross (Mark 16:6). He was seen by over 500 witnesses (I Corinthians 15:6) on at least 12 separate occasions over the course of forty days (Acts 1:3). Because he died our sins are paid for entirely. Because he rose from the dead we know that Jesus was who he claimed to be, God in the flesh.

EVERYONE who trusts in Him alone has eternal life. (John)

The amazing thing about eternal life is that it is a free gift given to us by God through faith alone and not by any of our good deeds (Ephesians 2:8,9). Jesus paid the price for our sins when he died on the cross and all we must do is receive the gift of forgiveness through faith. When we believe that Jesus died for our sins and trust in Him alone we receive eternal life, are passed out of death into life and are guaranteed a home in heaven (John 5:24).

Eternal life is not achieved by good deeds but received through faith. It’s not a matter of trying but trusting. When we believe we receive the forgiveness of sins and the gift of eternal life. Almost the entire New Testament is dedicated to talking about this eternal life and the implications of it in our everyday lives. From John through Jude the disciples of Jesus show us how to live like Jesus intended, serving each other in love. This is the heart of eternal life!

Because Jesus died on the cross and rose from the dead we will be with Jesus forever in heaven. When we trust in Jesus we enter into a personal, permanent relationship with God called “eternal life.”

Part of the reality of eternal life is that it doesn’t start after you die but as soon as you believe (John 10:10). This life is the joy of a real, exciting relationship with Jesus every single day through prayer, worship and living in the strength that God provides through his Holy Spirit (Ephesians 5:18).

The other part of the reality of eternal life is that all who have it will be with Jesus forever and ever in heaven someday. Once we receive it is ours forever and we are his forever!