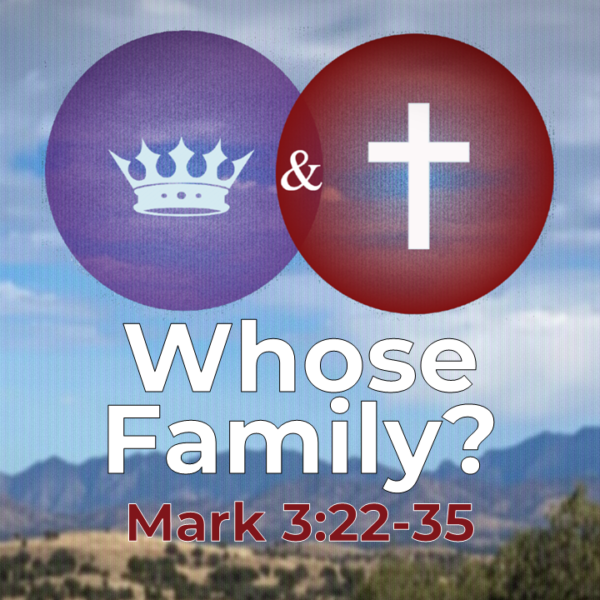 This morning we remembered the Lord’s Supper by celebrating communion. By eating the bread and drinking the juice together you have chosen to identify with the brothers and sisters around you in unity of spirit and worship of our Lord and Savior Jesus Christ. By salvation in Jesus by faith alone, by the same communion, the same baptism and the same membership – you’ve chosen a family.  In today’s Scripture passage we find Jesus talking about the unforgivable sin and asking the question to whose family do you belong?

A group of scribes came down from Jerusalem. This implies that they are not the typical Pharisees who have been pestering Jesus with questions about the Law and keeping the Sabbath. These were highly trained specialists in the Jewish law sent from the capitol to evaluate Jesus’ miracles and his claim to be the Messiah. It appears that their minds were made up in advance because they don’t talk to him or his disciples – they just jump right into two very serious charges.

The name Beelzebul (also translated Beelzebub) may refer to an evil spirit called the lord of the flies or filth or the prince of hostile spirits. Either way they were attributing Jesus’s words and actions to a demon rather than to God.

They saw that they could not deny the miracles He was doing, but they would not accept the possibility that he was doing this by God’s power. So they thought maybe they could discredit him by saying he was demon possessed and that his power instead came from Satan.

Jesus answers the accusations with questions as he often did. And he used parables or simple stories to illustrate truth.

He asks “How can Satan cast out Satan?” in other words, if I am possessed by evil spirits from Satan why would I cast out evil spirits by the power of Satan? This is simply not logical. It doesn’t make sense.

He gives the examples of a kingdom or a house divided against itself cannot stand. It will be ripped in two and fall apart. Jesus said “If Satan is fighting against himself and is divided he cannot stand and will come to an end.”

In 1858, Abraham Lincoln quoted Jesus when he spoke at the Republican National Convention.

“A house divided against itself cannot stand.”

I believe this government cannot endure, permanently half slave and half free.

It will become all one thing or all the other.”

Lincoln’s law partner Herndon said despite his defeat to become a senator, the speech awakened the people, and he thought it clearly helped Lincoln win the later election as President.

Next Jesus shares the parable of a strong man’s house. One does not simply walk into a powerful man’s house and steal all his belongings. First you would have to subdue him and bind him/tie him up so he can’t fight back and stop you.

In Jesus’ parable Satan is the strong man and Jesus has entered his house (domain of earth) ties him up and takes his possessions by freeing people from bondage to sin and evil spirits. He is healing their physical diseases and casting out demons. Again we see a clear demonstration of Jesus’s authority over the physical world and the spiritual realm.

Jesus went on to explain that all sins and even blasphemy can be forgiven. But whoever blasphemes against the Holy Spirit will never be forgiven. It is an eternal or unforgivable sin.

This idea of an unpardonable sin has troubled many people – leaving them afraid and wondering if they could have committed it.

The word blaspheme means to slander, use abusive words against someone or call them a complete liar. The way Jesus said this implies it was not just a one-time slip but a habitual action and attitude. Mike read from 1 John 5 for us earlier. The sin that leads to eternal death is mentioned there as well.

It is not just saying curse words or using God’s name in vain. Those are sins but they are not unforgivable.

Jesus was accusing the scribes of ascribing or the Holy Spirit’s work in Christ’s ministry to Satan instead. Refusing to believe that Jesus was the Christ – the Messiah. Denying Jesus as the Son of God and denying the work of the Holy Spirit.

Jesus was also warning them and others that it was not too late to change their minds about who He was (the Messiah and Son of God) and to repent of their self-righteousness and believe in Him.

On “The Briefing” podcast Al Mohler said the unpardonable sin is resisting the Holy Spirit’s call to repentance and salvation.

So have you committed the unforgivable or unpardonable sin?

If you have heard the Gospel and you continue to ignore the Holy Spirit’s call – you will not be saved. But while you are still living it is not too late.

Mohler said “it is impossible for the Christian to commit the unpardonable sin because that would mean the Holy Spirit’s work was not perfect and saving.”

Then we come back to Jesus’ family calling for him again. Last week his family was trying to pull him away from the crowds because they though he was out of his mind.

Who is Jesus’ Family?

We assume Jesus is again at Peter’s house because his family is standing outside and calling for him. Notice, they were outside not inside with Jesus and the disciples. They were not part of his followers – they were on the outside looking in.

Jesus asks “ ‘Who are my mother and my brothers?’

This is not exactly an insult to his family, but it is also not an clear invitation.

Jesus looked around at those seated in a circle. “Here are my mother and my brothers!.” In so doing, Jesus redefines family. Without spite, Jesus alerts his natural family that blood relationship cannot claim privilege. At the same time the statement indicates that those who sit around him and do God’s will are his family.

There are only two kinds of people: those who sit on the inside at Jesus’ feet and those who stand on the outside with false assumptions. Jesus teaches that discipleship depends on spending time in Jesus’ presence and doing God’s will.

In verse 35 Jesus adds “sister” emphasizing the rightful place of women in the Christian fellowship. The fact that Jesus does not add “father” probably indicates that Joseph has died.

There is no assumed membership in God’s kingdom. If “those around Jesus” (v. 21), even his physical family, are placed under question, then all who grow up in church and Christianity, whether through baptism, Christian homes, confirmation, church attendance, or charitable giving. Outsiders can become insiders and those who think they are insiders may actually be the outsiders.

Of course Jesus did not teach that physical relationships have no value, only that our spiritual status as followers of Jesus Christ and part of the family of God are even more important. This was radical teaching then and even now. How often do family gatherings take precedent over serving and gathering together with the church family?

Whose family are you in? Have you been called to repentance by the Holy Spirit and accepted God’s gift of salvation? If so, you have been adopted as a son or daughter of God. And if children then heirs of God and fellow heirs with Christ.

If you have not taken this step of faith, I invite you to come talk to me after the service. If you’re watching on-line, contact me through the church office.

Has the Holy Spirit called you? Have you repented of your sins, humbled yourself to realize your own good works or position cannot save you? Have you trusted in Jesus Christ’s death, burial, and resurrection to pay for your sins and restore a broken relationship with God?

If you’re an adopted child of God, how important is your church family? Do you look forward to spending time together? Are you helping others in your family? Are you mentoring or discipling someone younger in the faith?