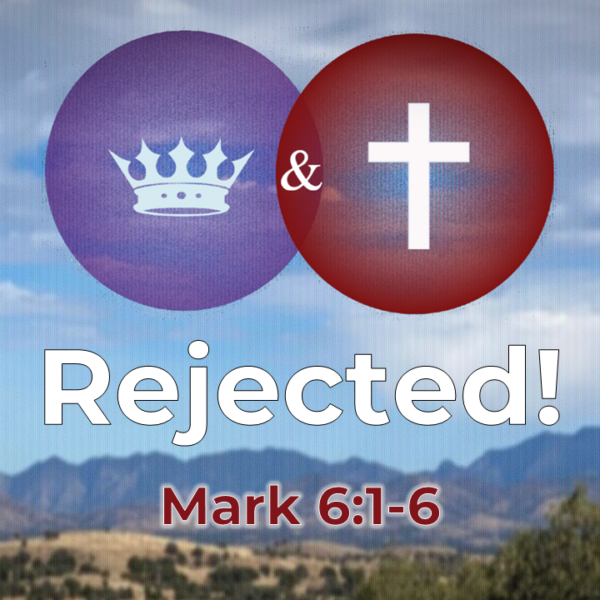 Last week we saw two women who reached the end of all hope be healed and saved by faith.

Today’s message from Mark 6 is something unbelievers and doubters would never expect to find in the Bible. This account appears in all three synoptic Gospels – That’s Matthew, Mark, and Luke if you’ve never heard that term before. There is no doubt this really occurred and because God included it in three Gospels it is a key event.

If the Bible was written by mere men who wanted to fake the stories of Jesus and get people to believe then they would never included an account like this. If they were not true, this and many other passages, like the failures of  apostles like Peter would never have been included in the Bible. This is a good apologetic or proof for the truth and authenticity of our Bible.

As we are seeing, the Gospel of Mark is very real and honest. It was written by Mark with direct input from Peter one of Jesus’ closest disciples. In chapter 4, we read that the disciples were terrified in the sinking boat and asked Jesus why He didn’t care about them.

Today’s passage is only six verses, but there are some key truths we can see and apply to our lives.

He went away from there and came to his hometown, and his disciples followed him. And on the Sabbath he began to teach in the synagogue, and many who heard him were astonished, saying, “Where did this man get these things? What is the wisdom given to him? How are such mighty works done by his hands? Is not this the carpenter, the son of Mary and brother of James and Joses and Judas and Simon? And are not his sisters here with us?” And they took offense at him. And Jesus said to them, “A prophet is not without honor, except in his hometown and among his relatives and in his own household.” And he could do no mighty work there, except that he laid his hands on a few sick people and healed them. And he marveled because of their unbelief.

And he went about among the villages teaching.

Did you catch the enormity of this story? Why it is so challenging to the Gospel?

Jesus who claimed to be the Messiah; claimed to be the Son of God; was rejected by his home town and even his own family. They were offended by his claims and his humanity. It shows a complete lack of faith in Jesus and His amazing message and ministry.

Why would this be in the Gospels if it wasn’t true?

This passage establishes the key truth that not everyone will believe and accept the free gift of salvation. Even those who grew up around church may only know the facts of Christianity but actually deny Jesus as Lord of their lives.

Jesus left Capernaum and for the first time recorded, he returned to his hometown. Even though it is not named here, Luke 4 confirms that it was Nazareth, where he was brought up. Jesus is called a Nazarene and on his cross, he was identified as Jesus of Nazareth.

Nazareth was a  town of approximately 500 people.

Jesus was invited to speak at the synagogue. That indicates he was well-known as a teacher.

Luke also tells us he was reading from the prophet Isaiah chapter 61.

Then he said “Today this scripture has been fulfilled.” In other words, I am the promised Messiah.

Many were astonished. Luke says they spoke well of him and marveled at his gracious words. This type of reaction came from most people who encountered Jesus. Last week after Jesus healed the sick woman and raised the girl from death people were overcome and amazed. He was not just a man with a unique message. He spoke with authority as they had never heard before. John 1 says the Word became flesh and dwelt among us. God was communicating directly through His Son.

As we will continue to see through Marks Gospel, Jesus is presented as the Messiah and King of Kings. The reader is expected to react to this just as the people who met him face to face did. The Gospel is not something you can choose to ignore or push aside. You either accept with joy or you reject it.

Acceptance means forgiveness, redemption, peace with God, eternal life. Rejection means suffering in your sin, living in opposition to God and His kingdom, and eternal separation from God and everything good.

The people quickly move from astonishment to doubt. They begin questioning just who Jesus is and how he could possibly be the Messiah.

Where did this man learn these things? – How could he be an expert about Scripture? He never studied to be a rabbi. He doesn’t have the credentials.

What is the wisdom give to him?

How could he know the deep things of God? Who does he think he is?

How are such mighty works done by his hands? How Jesus heal people? How could he raise the dead? These stories must be fake news.

Isn’t this the carpenter? He’s just a common laborer. His hands make things out of wood they can’t be the hands that heal and save! You must have confused him with some other guy called Jesus.

He’s the son of Mary not the son of God! Here are his brothers James, Joses (Joseph), Judas and Simon. He’s just another man like his brothers. And his sisters are here too! We know him. We grew up with him. What makes him so special?

Joseph was not mentioned. He was likely already dead before Jesus began his ministry.

They were staggered by such an equation; they took offence or ‘stumbled’ at him, as the Bible says. The people of Nazareth ‘knew all the answers’ about Jesus: they were not prepared for anything new.

The word translated “took offense” is skandalizomai, from which the English word “scandal” is derived. This same word was often used to describe the reaction of Jews to Jesus’ death (Rom 9:33; 1 Cor 1:23; Gal 5:11). Mark’s choice of the word is further evidence that he saw in the event a typical Jewish rejection of Jesus.

Isaiah 8 says the Lord will become a stone of offense and a rock they stumble or trip over. They will fall and be broken. God knew His people would not listen – that they would be offended by His Son.

Jesus responded to their offense with an old adage, a proverb that appears in many different cultures.

“A prophet is not without honor, except in his hometown and among his relatives and in his own household.”

You may know this as “Familiarity breeds contempt.” Or as Dave Ramsey, the finance guru says, “ It’s hard to take advice from someone whose diapers you changed .”

Psalm 118 prophesied that the stone that would be rejected became the cornerstone. This passage tells us about the nation of Israel rejecting their promised Messiah.

Later in Mark’s Gospel, when Jesus calls disciples to carry their own cross and be ready to suffer they begin to reject him. And eventually deny that he is their Messiah and King. When given the choice to free Jesus or free a known murderer, Barabbas, they reject Jesus and shout crucify him!

Sadly, most Jews today, are still rejecting Jesus and many have given up on the promise of a messiah.

As we consider the purpose of Jesus’ miracles – they were not to gain popularity, impress people, or make money from people as so-called faith-healers do today. Jesus performed miracles because of his godly compassion to heal and to point to his claims of divinity and his offer of salvation. Some people would not believe, even if Jesus raised a person from the dead right in front of them. Doing a miracle in these circumstances could only harden hearts and make a mockery of the gracious God who heals physically and spiritually.

Faith was a component of being healed and there were only a few who believed and they alone were healed. It’s not that the crowd gave him power, but without believing they could not be healed or saved.

Jesus marveled – he was astonished at their unbelief.

Even though God prophesied their offense and rejection – Jesus was astonished that with all of the miracles, the message of the kingdom proclaimed with authority and power – they still would not believe.

He didn’t stay and argue with them. He didn’t try to prove he was God by doing something amazing like moving e a house with his power. He moved on. He kept teaching and preaching the message of repentance and the kingdom of God throughout the other villages in the area.

Are you offended by Jesus?

Jesus had no formal training; he was not a scholar. And the people in his hometown knew this.

Maybe you are thinking “How can all these “smart” people be wrong about the Bible?” They say it’s just a big old-fashioned book written by corrupt religious leaders to take people in – control them – get their money. Are you thinking “I don’t want to be fooled too!”

Is your pride keeping you from accepting the Gospel – the gift of salvation?

Is it just a little too simple? Too easy? It’s a crutch for the weak or feeble-minded?

We have lots of excuses and questions we want answered. Questions like Who made God? Hasn’t science totally disproved the idea of creation? How can I believe the Bible when it is so old and doesn’t match modern truth? If God is good and able to do anything, why is there so much suffering in this world? Why are all the Christians I know hateful judgmental hypocrites? My God would never allow that to happen?

Faith and humility are required to believe and to be saved.

We need to humbly accept Jesus because we need forgiveness, we need salvation, we need peace with God. Our questions may not all be perfectly answered and our expectations may not be met – But Jesus alone is the one who can save us.

Are you embarrassed by other Christians who seem to be a little too believing?

Maybe they are not as smart, polished, and acceptable as you? Do you have a hard time humbling yourself to learn from someone who you think is just not quite what you expected. Remember, Jesus typically chose those the world had skipped over to be his disciples and spokespeople.

Jesus was rejected by His own people and He is rejected by most people today, but He is the only way to peace with God.

Not everyone will believe. Even those who grew up around church may deny Jesus.

In the name of Jesus who is the blessed and only Sovereign, the Chief Cornerstone, the King of kings and Lord of lords,  who alone has immortality, who dwells in unapproachable light, and God the Father who no one has ever seen or can see. To him be honor and eternal dominion. Amen.