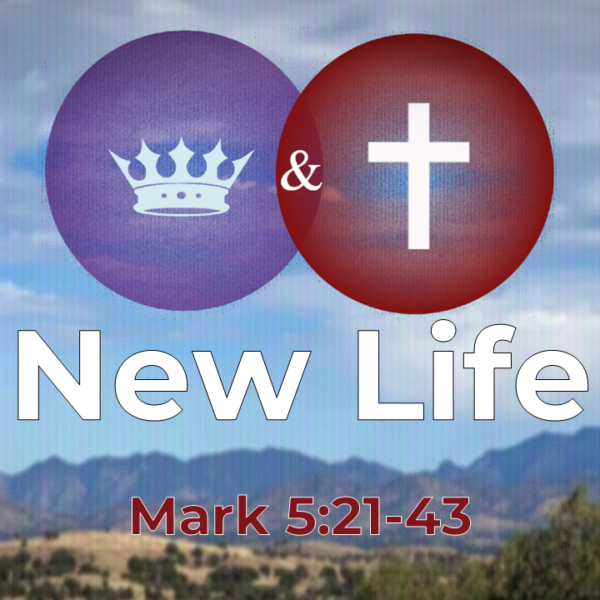 Last week, Dan Jones so clearly preached Jesus’ power over the spiritual realm and his ability to radically change the life of a dangerous outcast to society. Today’s passage as we finish Mark 5, shows us how Jesus brings new life   to the hopeless and the humble.

Do you feel hopeless this morning? Have you been waiting and waiting for God’s help and you’ve just about given up? Or maybe you’ve never humbled yourself to the place where you can admit that you need help. You need forgiveness. You need restoration. You need peace.

Even if neither of these describe you, let’s pray that God would speak to our hearts this morning through the work of His Holy Spirit.

When you see the word “Immediately” in the text say it out loud with me.

The Gospel of Mark provides two amazing accounts of healings with many parallels between them. Listen and jot them down as I read.

And remember to say “Immediately” along with me.

Jesus and his disciples crossed back over the Sea of Galilee after he cast the legion of demons out of the wild man of the tombs.

Jairus, a ruler of the local synagogue, fell at Jesus feet and begged for His help. He said, “My little daughter is at the point of death. Please come and lay your hands on her to make her well and live.”

If you recall, just a few days earlier, in Mark 3, the religious leaders from Jerusalem were accusing Jesus of demonic power. They totally dismissed the possibility that He could be the Messiah. So, asking for help was humbling for the local ruler – to bow before Jesus, the son of a carpenter. He humbled himself and he believed Jesus could help his daughter. And Jesus agreed to go. His ministry was not to the crowd but to a single girl.

But while they were on the way to his home, there was a major interruption. The crowd kept following Jesus and it says they thronged around him. A better translation means they pressed in on Him from on every side.

Mark tells us about a woman in the crowd who also desperately needed help from Jesus.

It says she had a discharge of blood for twelve years. This is referring to severe menstrual bleeding that would not stop. She tried doctors, but it says she suffered under their care. They could do nothing to help. In fact, her condition worsened and she had run out of money. There was nothing else for her to do. She felt hopeless.

Have you ever faced that situation? We tend to think doctors will always have an answer there is always a cure. Our son Will suffered for years with the effects of a concussion that came from a minor car accident. We visited doctors, specialists, had all kinds of cat-scans and evaluations, but there were no solid answers or positive results. This was really hard for us as parents – and of course for Will as he finished his senior year of high school, got married and started college in a hazy fog. He still has little memory of much of that time. Thank God for medical advances and treatments, but we need to recognize that not everything has a cure. There are not always answers. In times like that we can trust our sovereign, all knowing, ever present God to give us hope and peace in uncertainty. Because we know that believers have a better home and will be completely whole when we are in God’s presence for eternity. We also know that God allows these trials for us to grow closer to him, to trust him in everything, to strengthen our faith. Will realized that Mom and Dad can’t fix everything. Even doctors don’t always have an answer. There is something bigger and greater outside ourselves that is in charge. God!

The woman’s last hope was Jesus. She had heard about the healing of the paralytic man and others in the area and thought hopefully he can do something for me.

To make matters worse for her, her bleeding made her ceremonially unclean according to the law. She was banned from corporate worship and social gatherings. She was alone in her suffering.

She was to embarrassed to face Jesus or even talk to him, so she got close enough behind him to touch his outer robe thinking that alone could heal her.

Fringe refers to a Tassel. The OT called for men to wear a tassel and blue cord on each of four corners of their outer robe as a reminder of God’s covenant. Faithfulness.  (Num 15:38-39, Deut 22:12)

“Who touched my garments?”

The disciples’ response in Mark is more raw and realistic than the other Gospels where it is polished to sound a little better. Just like their response in the sinking boat – they are honest with Jesus even to the point of doubt. Jesus, you are surrounded by people, everyone is pressed around you and you want to know who touched you? Everyone!

Jesus kept looking at the crowd with questioning eyes.

And just to make it clear that he was not wearing a magic robe, Jesus said “Daughter, your faith has made you well; go in peace and be healed of your disease.” Not only was she healed but she was saved! She had peace with God, because she trusted in the Messiah, God’s Son, Jesus.

Jesus overheard this side conversation and encouraged Jairus, “Do not fear, only believe.” Don’t be afraid. Have faith!

Jairus had waited through this interruption, knowing that his daughter was close to dying. And Jesus says Trust me. Be patient. There no need to hurry. God’s timetable is seldom ours. I have impatiently waited many times for God to act, to answer my prayer, to make things clear. But over and over in the Psalms we hear these words “Wait patiently on the Lord.” God calls us to have faith and wait for His perfect plan to unfold.

Just as God allows trials to test our faith, do you think he uses delays as well?

Are you afraid or are you trusting Him?

Doctors couldn’t help her when she was sick and now that she was dead, there was nothing more anyone could do. Except for the Creator. The Giver of life! This girl would be saved by faith!

The Mishna quotes Rabbi Judah that for a burial “even the poorest in Israel should hire not less than two flutes and one wailing woman.” Of course, the ruler of the synagogue was not likely a poor man.

What is the Mishnah? Compiled around 220 AD by Judah the Prince, the Mishnah, meaning ‘repetition’, is the earliest authoritative body of Jewish oral law.

Jesus next statement leaves us with some questions and it brought in appropriate mocking laughter from he crowd.

The presence of noisy mourners is a clear indication that there was no doubt about the girl’s death, and Jesus’ response assumes that this is why they are there.  The context here indicates that Jesus recognizes that the  girl’s death is real, but temporary. He uses the word sleeping, just like in 1 Thess. 4:13 where it says we don’t want you to be uniformed about those who are asleep, that you don’t grieve as others who have no hope.

This is not a new doctrine of soul sleep, but a way of describing the first death as temporary because all will be awakened to eternal life in heaven or eternal suffering in hell.

The word Talitha literally means “lamb”. This was a loving name for a child, and Jesus is our Good Shepherd who cares for every one of his flock. He didn’t have to say a prayer to God or perform any ritual. He just took her hand and spoke to the dead girl and she obeyed!

Again, we see our dramatic action word – they were immediately overcome with amazement. They were amazed!

Jairus, his wife, Peter, James and John had just witnessed Jesus bring the girl back to life. He had power over the grave. They were probably thinking “who could do this but God!”

He didn’t need more mobs surrounding him. and He was concerned for the girl’s welfare. She needs some food after her illness. God cares about every part of our lives!

Were you keeping track of the similarities in these two healings?

Similarities in the these two healings. Both were women – not important in middle eastern society, but important to God. As followers of Jesus, we are called to treat all people with respect and compassion. Both were called daughter – by God the loving Father. Both situations mentioned twelve years – the woman suffered for twelve years with the disease and the girl was twelve years old. Both faced hopeless situations and were close to death – medical doctors could do nothing for them. Both involved humbly falling at the feet of Jesus and recognizing that He alone could save them. Both required faith to be healed. Both required Jesus to break ceremonially law and touch the untouchable. Both were healed and made whole by Jesus, the Son of God.

Both were saved by Faith. Not by their own works, or actions, or anything other than God’s grace.

Hope for the hopeless is found in Jesus Christ.

It’s never too late to reach out to Jesus. He offers hope for eternity and healing from our sin for those who call out to him by faith.

Humility shows us we need a Savior

We need to recognize our sin before a holy God, and humbly admit that we can’t fix ourselves. No matter how hard we try. We need a Savior. Acts 4:12 says, ‘There is salvation in no one else, for there is no other name under heaven given among men by which we must be saved. The name is Jesus Christ.

Jesus cares about your worries and fears.

He knows what you are going through. Only He can bring you peace.

God’s love reaches beyond our unworthiness or uncleanness.

He reached out to us while we are still dead in our sins. Do you judge people and decide whether they are good enough or worthy of your mercy, love, and grace?

Have you trusted Jesus as your Savior? Come talk to me!

Are you waiting for God to do something? Don’t fear. Trust Him.

For we wait for His Son from heaven, who God raised from the dead, Jesus who delivers us from the wrath to come. We wait eagerly for the hope of righteousness.

Grace, mercy, and peace will be with us all from God the Father, and from Jesus Christ, the Son in truth and love. In the matchless name of Jesus I pray, Amen.