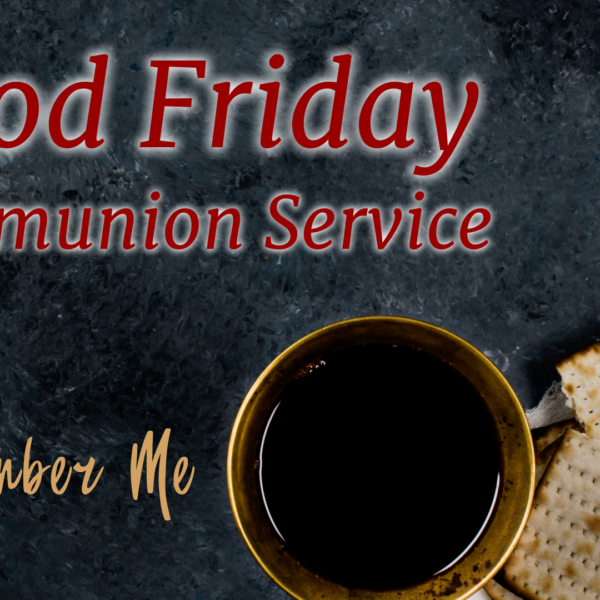 We would all like to be remembered after we die. Some people go to a lot of expense to make sure that they are remembered well – with large monuments, elaborate memorial services, donations to charities in their name, or even building a hospital wing with their name on it. In my family, before he died, my father gave my oldest brother John his father’s pocket watch. Being the youngest, I was grateful to receive a watch from my mother’s father. When I wear it, I think of my Papa Nuse and it bring back good memories of him. At funerals we talk about the special times and things we remembered most about our family members or good friends. Jesus Christ wanted his friends and followers to remember Him and He chose a really unique memorial. At the time He share it, this may have seemed insignificant, but it turned out to be something the world would never forget.

Before His death, Jesus did not say, “Remember the parables I shared with you, the deep message I shared on the mountain, all the amazing miracles I preformed, or when God spoke from heaven at my baptism.” Jesus did not ask His disciples to hold a special commemoration service to remember any of these outstanding thing about Him – like His supernatural birth or life, His divine teachings, His debates, or even His power to raise the dead. He simply took a piece of bread broke it, and gave to His disciples, and said, “This is how I want you to remember Me.”

This communion is the way Jesus wanted us, His followers to remember Him. His body the bread, his blood, the wine. Jesus said do this in remembrance of me.

On the night before He died, Jesus took His disciples to a private home where He had His last meal with them. But this was not just an ordinary meal – it was a very special occasion. It was the Passover. As they had done for centuries, the Jewish people of Israel were celebrating and commemorating the night God delivered them from Egyptian slavery. It was a meal that looked back to the past of God’s love and faithfulness, but it also looked forward in faith to a deliverance that God had promised through the coming Messiah. It was deliverance from sin’s slavery which could only be accomplished by a perfect sacrifice, a Savior.

This Passover ceremony was really important, not only because of what it helped the Jews remember about God’s past faithfulness but also it of what was prophesied for the future. This was the most deeply spiritual moment in the religious life of Israel and this is what would help us see the connection from the Old Testament to the Gospels and the New Testament.

Jesus Christ, the Son of God, and equal with God emptied Himself and became fully human while remaining fully God so that He could die on the cross in our place. God loved us so much that He sent His own Son to be our Passover sacrifice.

Now, on this night just before His crucifixion, while commemorating the feast of Passover, as was done for generations by all of the devoted followers of God, Jesus inaugurated the Lord’s Supper. It was a family event and this was Jesus’ family. This was how He wanted them to remember Him. As a willing sacrifice – a body that would be beaten, pierced, striped by whips, and broken; and His blood that would be poured out to take away their sin.

“For as often as you eat this bread and drink the cup, you proclaim the Lord’s death until he comes.”

Jesus, the Messiah, was chosen and sent by God His Father to offer His life to pay the penalty for our sins, so that we might be forgiven, made righteous and reconciled to God. This was God’s wonderful plan of redemption that He established before time began.

This is how we remember Jesus, two thousand years later. For the sacrifice He made on the cross. The perfect God-man without any fault – the spotless lamb and sinless sacrifice. The only possible sacrifice that could pay the penalty for the sins of the world. He suffered, bled, and died for your sins and mine; so that we could be saved. All who believe that Jesus is the Christ (the Messiah), the Son of God will be redeemed from sin and restored to a relationship with God the Father who loves us. And we can have eternal life through Jesus, the one who defeated sin, death, and the grave. That is how we remember Him tonight. And it is why we celebrate His resurrection on Easter Sunday.

May Jesus Christ, the Son of God, dwell in your hearts through faith – that you, being rooted and grounded in love, may have strength to comprehend with all the saints what is the breadth and length and height and depth, and to know the love of Christ that surpasses knowledge that you may be filled with the fullness of God the Father. May the peace of God which surpasses all understanding guard your hearts and minds in Christ Jesus our Lord through his Holy Spirit. Amen.

SONG There Is Room At The Cross