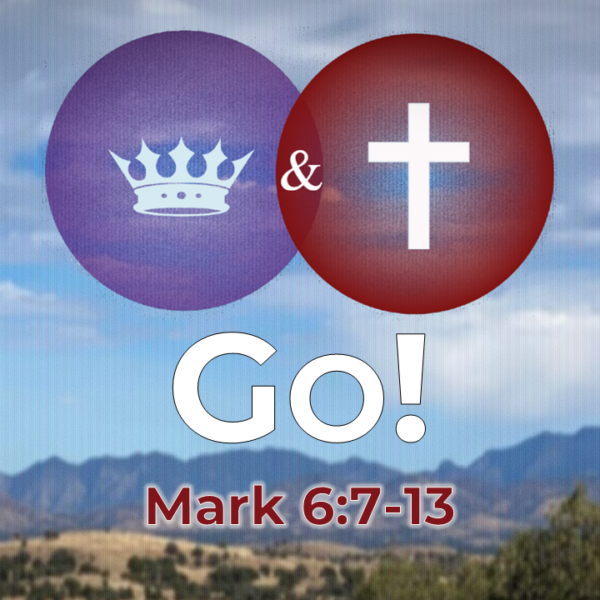 Who is traveling during Thanksgiving this year? Driving or Flying? How many of you like planning or packing for a trip? The Massaro family lived 10-13 hours from NJ for the past twenty years. Now it’s down to only 6 1/2 hours. We’ve survived a lot of long car trips with our four kids. God has been good to us over many years and many many miles.
How many list makers? Tetris-master car packers? Activity Directors who plan out every hour with snacks, games, or movies?
Imagine having everything laid out – clothes, toiletries, shoes, jackets, snacks for the car, books, electronics, games for the kids, extra money – and then leaving it all behind!
Not even an extra set of underwear that Mom said never to leave home without.
We’ve forgotten a few things over the years – but never left with nothing! That seems crazy.
That’s how Jesus prepared his Twelve disciples for their first ministry trips without him.

This morning in the Crown & Cross series from the Gospel of Mark we are continuing in Mark chapter 6.
Mark shows Jesus as a man of decisive action with a clear message and mission, and the reader is called to actively response to the message.
Mark divides Jesus’ life into two parts: his identity as Messiah and King over all things in chapters 1-8a (the crown) and then we see His purpose in suffering and dying on the cross in chapters 8b-16.
In Mark 6:7-13, we will see Jesus setting apart the twelve disciples for a special mission of their own. He calls them to Go and

Jesus called the twelve for a special mission. Mark gave their names earlier in chapter 3: Peter, Andrew, James, John, Phillip, Bartholomew, Matthew, Thomas, James son of Alphaeus, Thaddeus, Simon the zealot, and Judas. Jesus chose these men from the many disciples to represent Him. To carry his mission and his ministry beyond where he could go individually. Up until this point they had been sitting at his feet, listening, learning, observing, asking. Now it was time to get in the game.
He sent them out in pairs – Greek says duo duo. Like today’s famous duos – Batman & Robin, Dom and Brian, Butch & Sundance, Ernie & Bert, Han & Chewie – you get the idea. There is greater support and effectiveness with a buddy.

Going in pairs also provided truthfulness of message (a second testimony confirmed). It reduced individualism or personal praise. And it highlighted the necessity of teamwork.
​
Ecclesiastes 4:9–12 ESV

He gave them authority over unclean spirits. They were not going out with their own power. They had no authority over the spiritual realm or the physical world for that matter. But Jesus gave them His authority in sending them out.

Jesus gave them a charge or specific instructions for their mission. Mostly he told them what NOT to bring. Remember when I talked about preparing for a journey? Well Jesus had something very different for the disciples.
Take NOTHING – except a staff. No bread or food. No bag – common for traveling preachers to have a collection bag. No money in your belt. Any ever used a money belt for traveling? No extra shoes – just the sandals on your feet. No extra tunic. There were two kinds of tunics – one was the light inner layer light our underwear. And the other was an outer robe. When people traveled they often wore a second robe that could act as a blanket for cool nights outdoors.

Why was Jesus asking them to travel with so little? He wanted them to rely completely on Him. He would provide their food, places to stay, money as needed. It was about trusting God to accomplish the mission through them. Not about their great planning skills and equipment. And they were not supposed to collect money from those they healed or preached to. God would provide what they needed.
Their trust in God was also a testimony to those they visited and ministered to.
Mark says only bring a staff – Matt and Luke say don’t bring anything. Some point to this as an error in the Bible that makes it untrustworthy. Matt and Luke may have been saying don’t go get a staff – but Mark said just bring the one you have. Either way, it is not a contradiction that makes the message change.
There’s another interesting parallel here with the OT. In Exodus 12:11 God gave instructions for Israel as they were called and sent out of Egypt.
​
Exodus 12:11 ESV

God wanted them to be prepared to travel light – belt, sandals, and staff just like the disciples. The Israelites had to trust God to provide food (manna), water and protection.
Jesus also told them that they should stay at the home where they were welcomed. This may seem obvious to us, but the disciples were probably unknown. They were not famous like Jesus. So wherever someone recieved them and their message they should stay there. As they preached, cast out demons, and healed people their social status may grow – but Jesus did not want them to accept better invitations that might come. They were not out for their comfort or prosperity. Those that traveled and preached or ministered for collections were called false teachers. That’s how we can identify them today too. Here at FBC, we have offering boxes in the back and online giving so that our members and regular attendees can give to support our ministries and our missionaries, but we don’t fund raise or ask guests to contribute anything. The NT principle of giving proportionately as you are blessed is what we believe you should do. It’s between you and God.

Jesus gave another interesting charge to his disciples. If a town would not receive them or hear their message – when they left town they should shake off the dust from their feet. This was a symbolic testimony against those people.
Rabbis shook dust when traveling through Gentile lands to avoid bringing back “unclean” dirt. Mad Cow in Ireland. Clean boots with poultry in IN.
Matthew 10 says this town will be judged worse than Sodom & Gomorrah which also were warned to repent but ignored the message and were severely judged. Today we might think about cities like Las Vegas, Los Angeles, Bangkok or Amsterdam. Judgment is worse for people who hear the Gospel, they are called to repent, and seek forgiveness but they continue to live with no concern for God’s offer of salvation.

So they went out. Don’t miss this important statement. They went out. They didn’t stay with Jesus enjoying learning more and more. They flew the coop. They left the nest. They went out to complete the mission and they were able to do things that Jesus did.
Proclaimed His message of repentance to be part of God’s kingdom.
Cast Out demons just as Jesus did. His authority in their lives caused the demons to listen and obey.
Healed the sick. Mark is the only place that mentions anointing with oil. Olive Oil – sometimes used as medical treatment or symbolizing the blessing of God. Oil didn’t heal them – God did. Jesus never used it. Because it says they were anointing with oil I believe it was symbolize God’s blessing.
Their ministry was in proclaimed Word and in action – met people’s needs.

Disciples must be willing to go, trusting God to provide, and proclaim the Gospel in word and deed.
Have you heard the call?
We should expect difficulties and rejection in ministry. Not looking for prosperity for ourselves. Faithful messengers live in total dependence on God. They travel light not seeking comfort first. And they understand the condition of the world and the urgency for lost people to hear the Gospel.
Do you trust God to provide what you need? Don’t attempt ministry in your own strength or wisdom. Don’t do it alone! Don’t seek your own praise or money.
Will you go?
People need to hear God’s message of the Gospel – in word and action. Jesus said Go into the world, preach Gospel, make disciples who make disciples.
Call to ministry. Call to missions. Call to serve here at FBC.
We gather together as a church to worship God, to grow in the knowledge and likeness of Jesus, but then to Share the Gospel and His love with our community and the world. We are not meant to stay here. He wants us to Go!
When I was in fifth grade, around 10 years old, I raised my hand at a church missions conference and told God I would go if He wanted me to. Will you raise your hand and pray that today? If you do. Tell someone so they can be praying for you. Text me and let me know too!