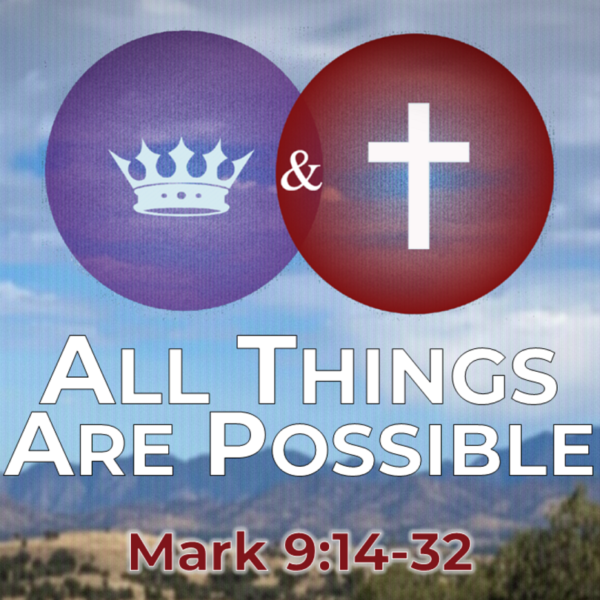 Home  ›  Sermons  ›  All Things are Possible

All Things are Possible

Good morning. If you were expecting to see Pastor Mark this morning, I hope that you are not too disappointed, but I appreciate the opportunity to share with you today in pastor Mark’s absence. At this point, I need to make a confession. Each time I began preparation to share a message with you I am struck by the overwhelming sense of responsibility, as well as the amount of work and study that it takes for me to prepare for a message. I know that there is a seriousness associated with being a teacher, in fact James says to avoid it altogether if possible. It is at that point where I begin to think to myself, “Why did I volunteer for this?” However, as I prepare and dive deep into the word of God so that I can be faithful to the text, I find that the word of God is opened up to me in new and fresh ways. There are lessons learned and convictions deepened that I have only been able understand through intensive study of the word. The reason I continue to volunteer to step into the pulpit when given the opportunity is that there is great benefit in the disciplined and prayerful study of God’s word. I pray that as a byproduct you are all encouraged as well.
We are currently working our way through the book of Mark in our series the Crown and the Cross. In last week’s scripture passage, Pastor Mark took us through the account of the mountaintop transfiguration of Jesus. Today we will be looking at the next section of scripture in the gospel of Mark, Chapter 9 verses 14 through 29, with the help of parallel passages in the books of Matthew and Luke. There is a great contrast between last week’s account and that of our text today. The transfiguration of Jesus took place on a mountaintop, while today’s passage takes place in the valley. On the mountaintop there is a father with a beloved son, but in the valley, there is a father with a tortured son. On the mountain top there is amazement from the witnesses, but in the valley, there is arguing and conflict. The mountain top was overshadowed with the presence of God, but in the valley, there was demonic possession.
Before we read our passage, lets open with a word of prayer.

Verse 14 says; “When they came back to the disciples, they saw a large crowd around them”. Jesus, along with Peter, James, and John are coming back to rejoin the other nine apostles and probably other disciples that were there as well. Luke tells us in his account that they had come down from the mountain, the day after Jesus was transfigured. Mark also says that there was a large crowd surrounding the disciples that included some “scribes” that were arguing with them. As pastor mentioned last week when speaking on the transfiguration, the beginning of this passage sounds very similar to the account of Moses on Mt. Sinai. In the book of Exodus, starting chapter 24, Moses goes up to the mountaintop and waits to receive the stone tablets that God was preparing for him. After spending time with God on the mountain, chapter 32 tell of rebellion in the camp of the Israelites. Joshua describes it as “a sound of war in the camp” and Moses find them in a state of disorder and sin. When Jesus came down from the mountain, he found the disciples and scribes in a state of arguing and confusion.
The encyclopedia Britannica describes the “scribes” this way; “In the 1st century, scribes and Pharisees were two largely distinct groups, though presumably some scribes were Pharisees. Scribes had knowledge of the law and could draft legal documents such as contracts for marriage, divorce, loans, inheritance, mortgages, and the sale of land. Every village had at least one scribe. Like pharisees, scribes were experts in the law. As we will see in a few moments, this is a “gotcha moment” for the scribes. They insulted the disciples, and by extension Jesus because of the disciple’s inability to cast the demon out of the boy. This all took place under the watching eyes of the gathered crowd.